We have grown accustomed to measuring the bightness of a bulb in terms of wattage, which is really a measure of the power the bulb draws. Brightness is actually measured in lumens. LED lights have the ability to use less power to produce the same brightness as an incedescent bulb. A 100-watt incandescent bulb for instance, produces 1,600 lumens of brightness, while an LED could do the same brightness only using 16 watts, consuming a lot less power.

Pay attention to the Kelvin number of the LED packaging. The color of a light is measured in Kelvins. For reference, an incadescent bulb has a "warmer" yellow light in the 2,700 Kelvin range, while a flourescent has a much "whiter lighter" in the 4,300 to 4,700 Kelvin range. See Kelvin table to right.

The LED industry thinks $10 is the pricing sweetspot where most people will start trying the technology, leading to mass adoption. The price will decrease the more people adopt it. The prices for LED bulbs in the 60-watt brightness category are expected to level off at about $5. 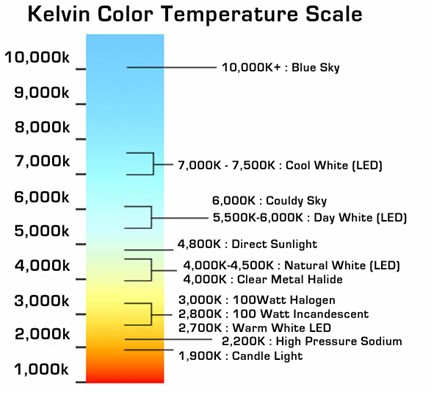