You do not need a cable or satellite service in order to get High Definition Television. And it’s free, BUT...

The New FCC Standard for broadcast signals of Digital TV may cause existing broadcast TV stations to go missing from your channel line up. Some fine tuning is needed to restore these channels.

Changes to Broadcast Channels are on the Horizon

If you watch free local TV programming using an antenna, you may begin to experience problems with missing channels.

The advancement of mobile applications such as 5G services, have resulted in the FCC decision to auction off some of the broadcast spectrum to wireless companies. This has resulted in the FCC having to reassign TV stations to new channels using the new standard called ATSC 3.0. The transition is already underway, scheduled to be completed by the end of next year.

ATSC 3.0 is the latest version of the standard for television broadcasting created by the Advanced Television Systems Committee (ATSC). The new standard is a massive overhaul for antenna-based TV. The switch could be as significant as the transition from analog broadcasts to digital HD.

ATSC 3.0 makes use of both over-the-air signals and your in-home broadband to deliver an experience closer to cable or satellite and is designed to allow for 4K resolution and a major sound upgrade to broadcast TV. It enables the ability to receive more channels in higher quality without the need for a large antenna as well as improved audio quality using Dolby AC-4 instead of AC-3.

This new standard is gradually making its way across America and the rollout should be completed by end of 2020.

With TV stations being reassigned to new frequencies, your TV's tuner may not recognize the channel frequency of the reassigned TV stations. For these channels, the existing channel assignment will remain black and not show any program information.

You will need to do a reset of your TV tuner, by doing a rescan to receive these TV stations again but in some cases, your TV antenna may not be compatible and a new antenna may have to be purchased. The decision to purchase a new antenna depends on the city you live in and on the type of antenna you are using. 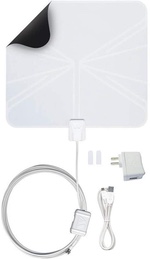 The rollout of the new standard will be going on through 2020, so you may need to repeat this process you more than once as the TV stations migrate to their new frequencies.